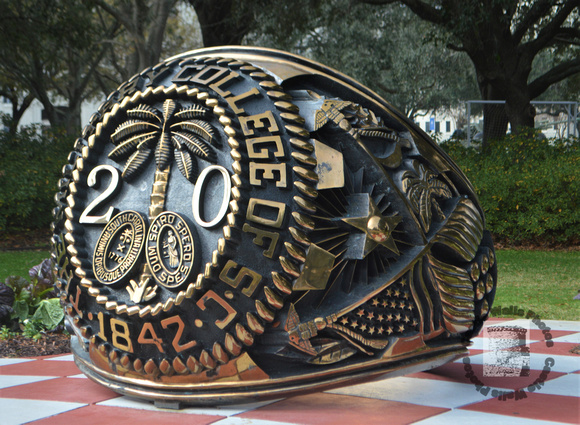 The ring statue was unveiled on Oct. 14, 2011. The statue is made of bronze and weighs approximately 3,000 pounds. It was a gift to The Citadel Alumni Association from Palmetto Balfour, a national class ring manufacturer. Each Parents’ Weekend, the numbers on the crest of the ring are changed to represent the current class of seniors receiving their rings. The statue was made at the Heart Art Foundry in Bastrop, Texas.

Despite numerous building additions, by 1918, enrollment had outgrown the capacity of the Old Citadel on Marion Square. The City of Charleston offered the State a large tract of one hundred seventy six acres adjacent to Hampton Park and along the Ashley River for a new campus. The first main buildings to be completed were the main barracks (Padgett Thomas), the College Building (Bond Hall), Alumni Hall and the Mess Hall (Coward Hall). Although not originally planned or budgeted, a hospital building was among the first buildings completed on campus due to a generous gift from an anonymous citizen of Charleston. The Romanesque style of architecture was followed in constructing the buildings and the use of arches and courtyards replicated those at the old Citadel. According to reports, the corner stone of the College Building was laid on a beautiful Thanksgiving Day, November 25, 1920, by the Grand Mason of South Carolina, in an imposing ceremony that included a parade of 2,200 Masons in their full regalia and an audience of over 5,000, including several hundred alumni.
© Castle Walls Photos
Powered by ZENFOLIO User Agreement
Cancel
Continue