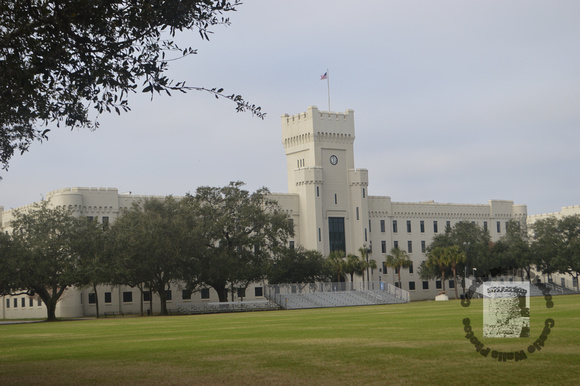 
Despite numerous building additions, by 1918, enrollment had outgrown the capacity of the Old Citadel on Marion Square. The City of Charleston offered the State a large tract of one hundred seventy six acres adjacent to Hampton Park and along the Ashley River for a new campus. The first main buildings to be completed were the main barracks (Padgett Thomas), the College Building (Bond Hall), Alumni Hall and the Mess Hall (Coward Hall). Although not originally planned or budgeted, a hospital building was among the first buildings completed on campus due to a generous gift from an anonymous citizen of Charleston. The Romanesque style of architecture was followed in constructing the buildings and the use of arches and courtyards replicated those at the old Citadel. According to reports, the corner stone of the College Building was laid on a beautiful Thanksgiving Day, November 25, 1920, by the Grand Mason of South Carolina, in an imposing ceremony that included a parade of 2,200 Masons in their full regalia and an audience of over 5,000, including several hundred alumni.

The ultimate test of any academic institution is the quality and character of its graduates. Through three different centuries, The Citadel's contribution of leaders to society has been greatly disproportionate to its size. Numerous alumni have served as flag officers in all branches of our uniformed military services. They have served as governors, United States Senators and Congressmen, distinguished jurists, ambassadors, presidents of universities and colleges, prominent theologians, engineers, doctors, lawyers, writers and business executives in many diverse fields of endeavor. The record of Citadel graduates has more than validated the hopes of Governor Richardson in 1842, that the institution he sought to establish would produce useful citizens. At the beginning of the Twenty-First Century, The Citadel continues to stand as a bulwark of Duty, Honor, God and Country, dedicated to producing principled leaders for service to the state of South Carolina, and our nation.
© Castle Walls Photos
Powered by ZENFOLIO User Agreement
Cancel
Continue